This doesn’t look so appetizing. I might have browned that sausage, but who’s looking. I guess we all are! I could plate a great breakfast for your eyes — and I may do that later on, but today, I wanted to do an ordinary day when normally nobody is looking. I feel like a “makeup artist” without makeup.

My morning routine holds up day after day. I am also a creature of habit.

I feed the stray cats first because my security cameras have told me a good 40 minutes earlier that they were trying to get me out of bed. You wouldn’t believe me if I told you they stand underneath the cameras and look up. I wouldn’t believe me either, but they are stirring.

My two tigers and 20 year old Siamese sit in front of the refrigerator waiting for their treat. I give them a little Crema Mexicana to start their motors. It’s a Los Angeles thing. Lucky is my Latino Siamese. In old Los Angeles, the Latino family would wake up with song. The neighborhood would fill with music. In my house, they purr and it flows out to the ferals who feast on some pretty good fare.

I throw the front door of the house open and let the cats go crazy on the enclosed front porch while I fumble through my own process. While they are chasing squirrels around the window sills, I’m tuning in the local news on the kitchen tv. (And wish I was still living back home in Los Angeles!)

If you suppose that my first need is a cup of coffee, you might be only half right. I once owned a Kurig coffee maker, but they are hard to keep clean and they attract mold.

I still have a one cup approach and it’s not Folgers Crystals (instant), except in an emergency. My go-to is filtered coffee. I have a French press, which is another convenient way to make coffee, but coming from the old school, I regress back to the 1970’s and use a Melita filter system – the one cup.

I have an original Chemex in pristine form, but it comes out only for company. There has been a resurgence of the Cemex coffee makers, so finding filters for them is easy. For a morning routine, it’s a bit of a hassle to undo the wood handle. In the past, people washed the whole thing and the wood finish was a disaster after that. You have to take a Chemex apart if you want to keep it pretty.

I might have left my time machine, but I did not stray far. I’ve gagged on too many brands of decaf coffee. I have returned to an old standard, Folgers Decaf ground coffee.

I want my eggs with hot sauce. If we’re out of sriracha, I’m yelling at the cats.

When it comes to scrambled eggs, I nearly gave up on the perfect preparation. I left the copper kitchen behind in 1985 and my skills need more polishing than those beautiful all copper pots that I gave back in the divorce.

How many ugly eggs have I hatched in “everyone’s favorite,” cast iron? My usual go to for cooking eggs is another throw back — an electric skillet set at a constant 200 degrees. I decided that I needed to restart my cooking acumen and I would be damned if I didn’t master the pile cast iron skillets in my cupboard.

I needed guidance. I consulted my “Ouija Board,” Google/Youtube.

Some people say that you need to have a hot skillet to be successful. My approach to that advice turned into an art project.

If success comes in an electric skillet at a consistent 200 degrees, my instincts told me to use the lowest heat possible. I used a silicone spatula and using a pushing motion with the spatula nearly vertical I moved the eggs around with a pushing from beneath motion and if the eggs seemed to stick, I was able to move that forward into the egg mixture before it cooked on to the pan.

The problem that I encountered in this perfect episode was that I previously cleaned the skillet with kosher salt and coconut oil. My meal was soaked in salt. I didn’t rinse enough before I put the pan away. Normally, I salt my grapefruit to bring up the flavor, but today, I had enough salt to create a new ocean.

I didn’t take time for fancy sausage. It’s nothing more than a quick heat up in the microwave of a pre-cooked apple chicken sausage. It tasted fine, but even for my eyes-only, I need a little browning. At the very least, next time, I promise to brown the sausage and if I add butter to the eggs, let it be ghee. Otherwise, I’ll have browned eggs as well.

What’s your morning starter? Do you do the layout for yourself when nobody is looking? Or do you prefer a simpler preparation? 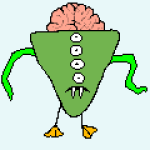